People with a foal in their paddock range from owners who have spent thousands of dollars on stud fees to those who buy a mare to ride, she keeps getting fatter no matter how much exercise she gets, then one day pops out a four legged present!

Whether the foal is a surprise or an expensive well planned investment, the most common failing on the part of the owner is correct and regular hoof care.

For around the first 5 months foal feet grow at a phenomenal rate, far faster than the adult horse.

Owners of foals need to get with the programme and start a trimming regime early to make the most of correct hoof and limb development that will maximize postural and gait balance.

Because our New Zealand climate grows a massive amount of grass and most parts of NZ have soft soil, compared to more arid areas of the world, our young horses need more trimming.

Cute foals capering around in their pretty green pastures are consistently being set up for seedy toe, abscessing, under run heels, frog thrush, heel imbalance and heel contraction all of which will go on to effect the way they carry themselves for the rest of their lives. All for want of balanced regular trimming, which in a well handled foal would take 10 minutes!

Newborn foals have ‘reverse’ shaped feet, like an upside down cone – smaller at the bottom than the top.

A foal can grow hoof wall from the coronet to ground level in 4 months!

This is due to the rapid hoof wall growth in all directions length, girth and thickness, in the first 4 to 6 months.

Then, gradually, growth begins to slow to the adult growth rate of around 1 cm per month.

As a general rule, the trimming of foal feet in most parts of NZ should start at around 2 weeks of age.

The important trimming points are; 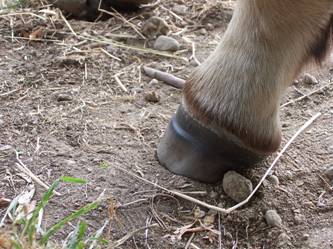 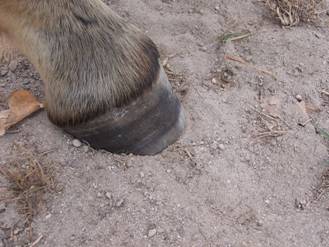 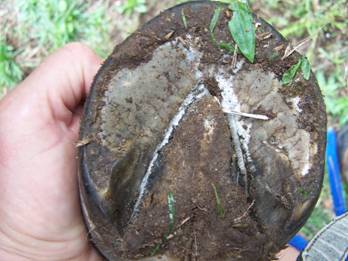 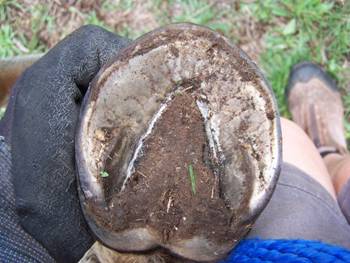 Midas, left front at 3 and a half months – I trimmed every 2 weeks until 5 months old then I gradually lengthened the time between trims to monthly as his hoof growth rate slowed down.

Before and after trim – just bringing the heels back towards the rear part of the hoof and lowering the wall to the outer level of the sole without rasping sole. Then putting a small bevel on the outer edge of wall to take the sharp edge off.

The bar on the right of the picture was rasped a bit because it was as high as the wall in that area, the bar on the left was still lower than the wall.

No trimming of frog and or sole.

Foal trimming should be easy and quick. Balance the heels, lower excess wall and bevel.

Foals do not have the concentration span for a long, drawn out ordeal. Keep it short and simple or you could just encourage them to find interesting (annoying) ways to be a pain in the arse!