In April 2012 I picked up Timmy, a 22ish year old miniature gelding, from a friends place. He had been there for 8 years and rehabbed from long term Cushings like symptoms – long coat, rapid hoof growth, laminitis.

My friend had a new job which meant she couldn’t put the extra time into managing this small horse with a big attitude and Timmy was finding new and exciting ways of eating himself to death. Breaking though hot tapes into the belly high green grass during the day while she was at work!

His past eight years of good health vanished and he was in laminitis mode again.

I’d known Timmy for at least a decade so knew he would pull through relatively easily with a change back to a mostly hay diet, herbs, steady exercise and life on a track system.

In June when he was back to his old cheeky self I borrowed another mini for company. The new gelding was too young and untrained to fit in so after three months he went back to his owners and I started looking for another older ‘good doer’ type companion for Timmy.

That is when things got really interesting.

Chelsea, another HOOFNZ trimmer, mentioned a very sweet but very toxic foundered mini around 7 years old that was on death row.

As she was relatively young I assumed she wouldn’t be too badly damaged. 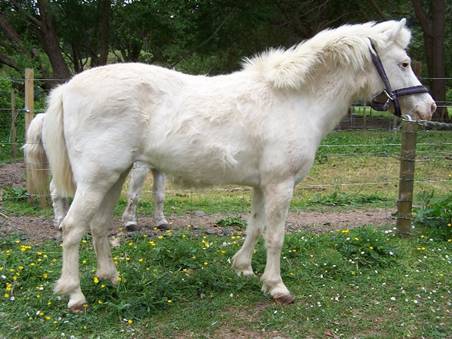 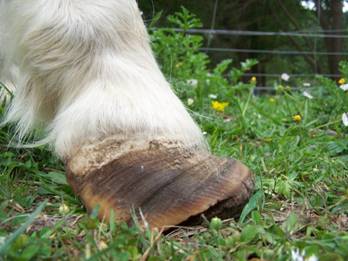 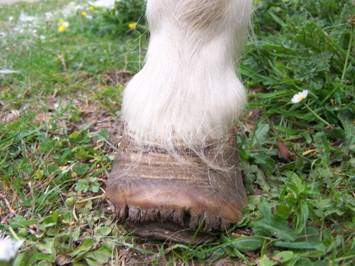 She was a bit bigger than I had expected and if I’d seen her before I went to pick her up I probably would have left her to her fate.

I don’t think I’ve seen a horse or donkey as sick as this little one.

Her skin was orange. She was excreting a yellow fatty like serum through her mane, tail and under her forelock. The slight nasal drip that is clear in healthy horses was jellybean yellow. Her eyes were running and the eyelid skin was scabby and crusted. Her blue eye had a reddish, brown haze as if some small blood vessels had burst somewhere.

When I checked her heart rate the next morning her heart was missing every third and sometimes fourth beat.

Her first trim only involved lowering the heels a bit and padding her feet as she was too sore to cope with the rasp or nippers on the front of her feet and frankly it wasn’t her feet I was worried about at that point. I was more concerned about trying to support what appeared to be a system wide failure and avoid a colic episode. I’m no vet but I had the impression that her liver and likely her kidneys too had been under tremendous strain for quite some time.

Oddly though, she would prick her ears and look interested in everything. It took me a few days to figure out that this ‘friendly/happy’ expression was less likely to be emotionally driven and more likely because her vision was impaired and she was trying really hard to see.

The following shows the first 2 weeks of gentle exercise to carefully help walk Ellie out of her laminitis episode without putting too much strain on other stressed organs. It is likely she improved more by good luck than anything else and I do not recommend using the following as a guide to help other laminitic minis. Please don’t assume this is what every mini in a similar condition needs. It’s just a documentation of her journey.

Nov 11
Devils Claw before floating her home.
On arrival I lowered and leveled her heels slightly and padded both front feet.

Nov 16
3 laps am
Back and top track pm
Clear nasal drip. Nearly trotted (more of a shuffle really) to grass am, trotted after feed bucket pm

Nov 18
Separated from Timmy day and night due to Timmy being an even bigger shit.

Nov 23
No leading. Self motivated movement has started.

The general rule with laminitis is to get the horse off grass and feed hay. I didn’t know how many more shocks her system could take and as Ellie also had some dental problems I decided to let her graze some grass but only in the morning when the sugars are lower and only the lower carbohydrate species. Though I also hand picked some low carb grasses for her to nibble on in the afternoon – yorkshire fog, prairie grass, cocksfoot plus some hay.

So here is what she ate for the first 2 weeks.

Then back on a track with no grazing afternoon and overnight but with access to hay in slow feeder haynets.

Again, please don’t assume this diet will work for another horse in a similar condition.

Ellie had previously been on a rollercoaster of access to lots of the wrong type of grass and then locked up in a pen with some hay. I don’t know how much hay but I suspect she spent too much time without food and then was let out onto grass again days later when the owners felt sorry for her (usual story) or the neighbours complained about the mini being locked up...

Although Ellie improved progress was very slow and she still needed hoof boots and pads to move with at least some comfort so eight weeks later when she could cope with another float trip I took her to the equine hospital for a checkup and x-rays (see images below).

The vet found that she had cataracts and said her pricked ears would be because she is listening so intently to everything, making up for her reduced vision, How reduced? Well, the vet said “It’s hard to tell because it’s difficult to get them to read the letters off a card”.

Ellie is still with us but there have been times when I’ve thought she should go to the big paddock in the sky.

While she initially improved (bit hard to get any worse!) she did go through some nasty abscessing patches which were not surprising considering the amount of coffin bone loss she had.

I really have no idea how such a young miniature horse could have sustained this amount of damage.

I’ve seen it often enough in horses and donkeys three times her age but this just makes my head spin. 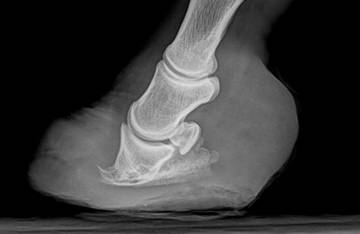 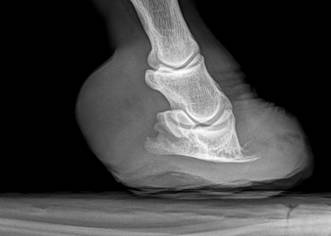 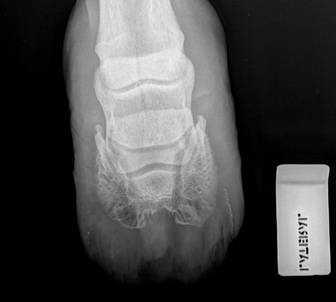 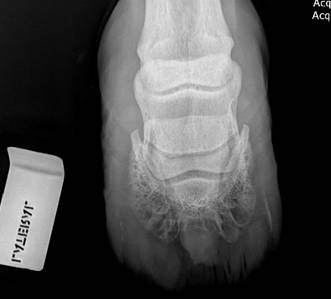 I wouldn’t recommend trying to rehab any equine with this much coffin bone loss.

There is bound to be abscessing and even a mini only weighing in at 150kgs still has to lift a lot of weight of the front end if there is pain in one or both front feet and if something happens in the hind end at the same time it makes a difficult situation unbearable.

Also, at her vet visit it was confirmed that she had liver damage and later I discovered that when the liver isn’t functioning fully anything toxic falls straight out the feet in more abscessing.

Far out, what a nightmare.

On the recommendation of an equine vet I drenched all my horses with a moxidection drench because apparently there is worm resistance to some of the drenches used in NZ.

Good idea, probably, for most of my horses just to be on the safe side.

I drenched her in the morning.

By the afternoon she had rocked back on her hind feet.

At first I thought she was laminitic again but watching her I could see that she was trying not to load her heels rather than her toes.

It took a long time for the chemicals I’d poked in the front end to exit via her frogs (almost all of her abscesses have pushed out through back of the frog) but it’s made me think really carefully now about what she consumes.

I don’t think it’s just a coincidence that she had hoof sensitivity after drenching because she had also done the same thing when I tried her on a vit/min supplement.

I just hadn’t made the connection then.

Her eyes have also caused a bit of drama.

With her reduced vision she has managed to bang each eye on different occasions on who knows what which resulted in sore weeping eyes that attracted flies.

The second time she did it I used Homeopathic Euphrasia 30c for 5 days and was really impressed how quickly her eye recovered. Both eyes have always been a bit weepy and when she first came they were really yuck with a kind of yellow, clotty discharge that ran from her eyes right down the side of her face. That changed to a clear discharge but I still had to wipe her face every day. After the homeopathic treatment they have pretty much cleared up completely.

She’s still in hoof boots and pads at night. I’ll give her another 6 months to see if she can get to the stage where she doesn’t need the boots but I’m not holding my breath about that.

Summer is not the easiest time for Ellie with the hard ground and yummy sweet grass popping up but she has been comfortable enough to not need hoof boots and pads most of the time.

Both Ellie and Timmy graze our driveway or lawn each morning until midday then they are back on their tracks with their hay in the afternoon and have a small feed of Speedy Beet, Safe and Sound with magnesium and a bit of salt.

Ellie either has turmeric with a few grinds of black pepper or MSM and Vit C depending on what I’ve got at the time.

Both turmeric and MSM are anti-inflammatory and make her a bit more comfortable on her very compromised front feet!