I never wanted a wild horse.

I have always believed that any creature born in the wild should be allowed to stay there.

In June 2003 I became the owner of 2 wild Kaimanawa colts from the annual muster. 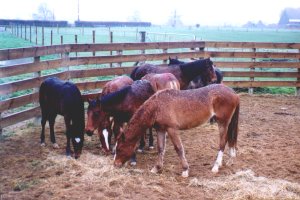 This came about more from my obsession with the equine hoof than anything else and I did at the time believe I was probably biting off more than I could chew moving from domestic horses to wild ones.

In 2002 I had tried in vain to find out if any studies had been done on hoof wear patterns in the wild horse population that we have in New Zealand in the hope that I could see how the environment here moulds the equine hoof.
So many wild bands have been studied in different parts of the world and hoof trimming has been developed to mimic the way horses in each area naturally wear their feet.

Any difference in the hoof wear of New Zealand’s wild horse population could be useful for our domestic horses.

In 2003 a series of things happened and I had the opportunity to buy 2 young colts that were in need of a good home.
I thought this might be the only chance I would get to see how the environment had shaped our wild horses hooves. Plus it gave me yet another chance to save a couple of lives. 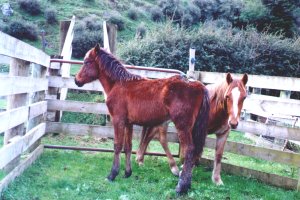 When the two colts that had been selected for me had settled into their new home and had begun to recover from the ordeal of mustering, being spilt up from their family group, trucking long distances and adapting to a completely different lifestyle, I was able to get a good look at their feet.

In the first few weeks of captivity they were basically left to adapt to all the changes. I would feed them hay twice a day so that they would begin to see me as a food source and not a threat.

Arrival at our place. 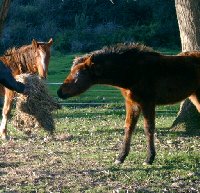 During these first weeks I was surprised at how quiet they both seemed, just mostly walking around, even when I went close to them they would just walk away. It was later that I realised they were still in shock from all the things that they had been through.
When they did begin to move and act like young colts I was impressed by the way they moved.
They had a lot more freedom in their shoulders than I had expected and they stepped well under their bodies with their hind legs. 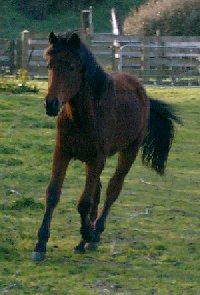 The rising 2yr old would chase the rising 1yr old through a randomly planted row of mature trees at full gallop, both of them weaving and ducking and amazingly, never once connecting with a tree or branch. 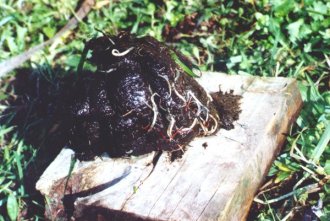 Another interesting thing was how the huge worm burden that they had hardly seemed to affect them.
The only clue to the young foals parasite load was that he was a bit lethargic and couldn’t keep up with the yearling when they galloped around. He would stop sooner and rest for longer afterwards.
They didn’t look overly wormy, not like I have seen with a domestic horse when they have a few too many worms.
The horses are all drenched at muster with a pour on that does worms and lice and certainly there was evidence that the pour on worked because a lot of worms and bot larvae were in their droppings.
One month after they arrived I thought to be on the safe side I would give them an oral drench, which they both accepted like perfect gentlemen.
For the next week the amount of worms that were excreted was staggering. If that had have been a domestic horse it would have looked nearly dead.
Vast amounts of bots etc come out of both horses again, but the foal defiantly had the most colourful array.
Of course, I just had to take a photo.

As for their hooves I was interested to see that their toes were long and their heels under-slung. They also had a distinct toe first landing, all three signs of an ‘unhealthy’ hoof.
The hoof growth would not have come from being confined without natural movement after they were captured as they had been yarded no longer than 5 days before they came to my place.
Maybe they came from an area that had plenty of grass and they did not need to roam far foraging. As the numbers of wild horses has been so greatly reduced there could be an abundance of forage in some areas now.
I was able to see under 1 hoof on another small foal 10 days after being mustered and her hoof was perfect, so hoof health obviously depends on the particular area that each band is roaming in as to how different the hoof wear patterns are. 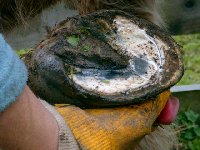 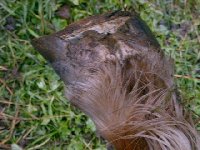 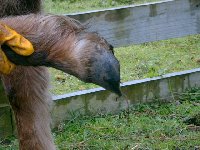 Their intelligence far surpasses any domestic horse I have handled and I can see how they could very easily become difficult if their trainer/handler wasn’t quite on the ball.
Both colts have learnt faster than any other horse I have trained so I don’t think it is a ‘one off thing’
Their agility and hyper developed brain would come from being born in the wild.
Having to use their brains and bodies from the moment they are born develops them to the full extent of their being. 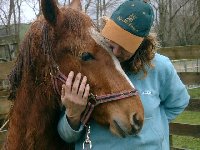 I feel very fortunate to have been given the  opportunity to learn from these little equines and though it would be better for  the horses if they were allowed to continue their lives where they were born, I  do look at the yearling and hope that he will grow big enough for me to ride.