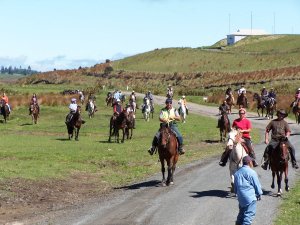 Over the weekend of the 6-7th of December 2003 I journeyed down to Waiouru with a few friends that also ride barefoot horses to join a group of horses and riders, 63 in total, who were trekking through New Zealand Army territory to spot Kaimanawa wild horses. 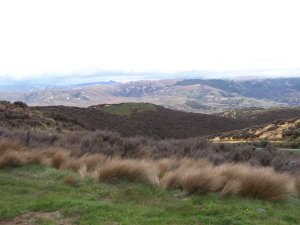 At least 11 of the 63 horses were barefoot and coped well with the terrain considering most of the 22-30 km ride on Saturday was on Gravel roads. I was very pleased with the way my horse handled the harsh surface especially as we had only just come out of an extremely wet winter and he had very little riding and certainly no real conditioning for that kind of footing. I carried his Old Mac® boots with me but he never once gave me any indication that he needed them. The rough metal surface had no impact on his desire to jig-jog, piaffe, half-pass and canter on the spot. It would have been a great ride if I wasn’t for the fact that I needed to concentrate so hard on staying on my formerly well-mannered horse while he plunged and cavorted, kicked and bucked all over the Kaimanawa Ranges. 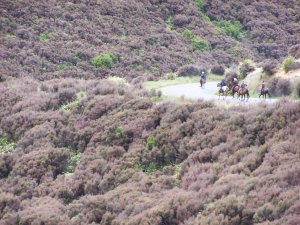 The weather was very kind to us with rain overnight on Saturday putting a new dusting of snow on the mountains that provide the magnificent backdrop to the vast landscape that is the Central Plateau of the North Island of New Zealand. 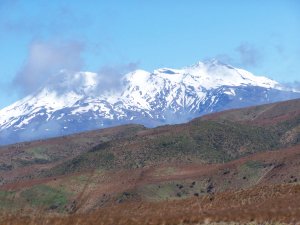 Even though December is the beginning of our summer we where warned to dress warm and take coats as the temperature can drop very quickly in the region. Dust storms are another hazard that can be thrown at you at anytime and I certainly ate a fair amount of sand on Saturday.
The majority of horses that were ridden on the trek were Standardbreds. There were also a number of previously wild horses being ridden back into their home territory.

Our first close encounter was with a young black bachelor stallion with white on his hind legs and face. This guy put on a dazzling display of masculinity with his big flashy trot from one area to another, giving us the impression that there was more than a smattering of expressive carriage pony in his bloodlines.  He was obviously checking out whether he could score with any of the mares in our group. We had been forewarned that if you were riding an in season mare to stay in the middle of a group of horses to minimise the chance of getting ‘up close and personal’ with one of the young stallions!
After about 10 minutes he must have decided against pursuing any intimate contact and trotted off up the road and around the corner and out of sight. Much to the relief of a couple of the people riding mares.

The tussock is amazing. When viewed from a distance it looks like a thick blanket, but as you ride through it is surprising how much grass there is between each plant. 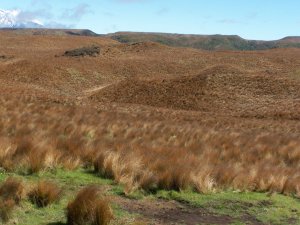 Connor was not impressed with tussock.

The tussock is high enough to get right up into the sensitive underbelly areas and this was when my dressage horse began to morph into a raving lunatic. It started with kicking and no; it didn’t matter if anyone was in the firing line. Sorry Chris! Then evolved into a kick-buck and continued into a downward spiral where ‘anything goes.’ I wondered if that was why the Kaimanawa wild horse had a reputation as a non-kicker. Because they grow up living in the tussock they are very familiar with things touching their legs. 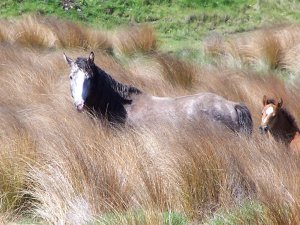 We were heading for the Argo valley where each year D.O.C rounds up some of the Kaimanawas for sale and/or slaughter to keep the number of horses at around 500. The horses come down into this valley to eat the spring growth so there are usually a number of different bands grazing there at this time of the year. 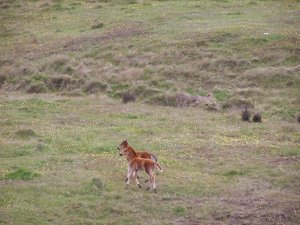 With the approach of so many ‘new’ horses the wild ones moved off into the distance but were slowly returning while we ate the lunch that some of the soldiers had been busy cooking for us as we rode to the yards.

As we rode back out after our lunch break we saw quite a few little groups before they took to the hills again. 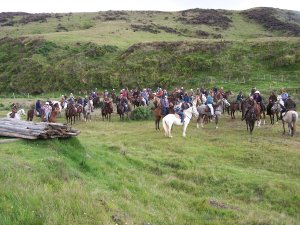 We where treated to another display by one of the stallions before he also retreated with the others.

The ride back to the Military base took the same road as the army truck that had bought in the non-riders and soldiers. The trip out of the valley passed in a blur of ‘here we go again’ horse antics and most of the time I was too ‘horsed out’ to notice the few bands that were grazing near the road, thinking only of how my body was going to feel in a few days time.

The ride on Sunday went to a different area to look for more wild horses.
I decided to leave the horse in the paddock and travel out on the M.O.G. -army truck- to take photos. 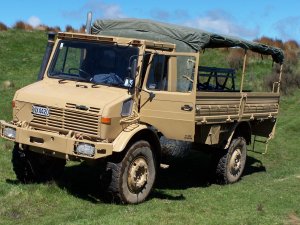 About 35 riders rode out on Sunday with the truck drivers directing them to where horses had been sighted. The first group we came across had a laminitic looking stallion. This group were in a swampy sort of area so whether his hoof distortion came about due to lack of wear or whether he had an injury that has caused the hoof to distort is anyones guess. He does have an obvious fetlock issue though so maybe his hoof problems stem from an injury. He is still holding his own though and this shows in the amount of bite marks on the other young colt in the group. 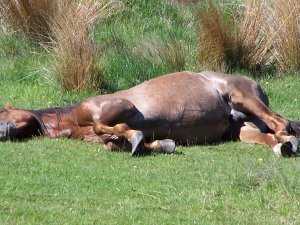 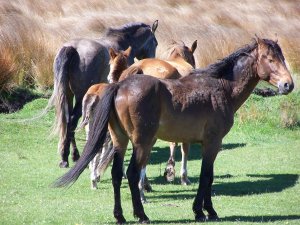 The horses are so used to Army vehicles that we were able to drive right up to most of the bands we saw. 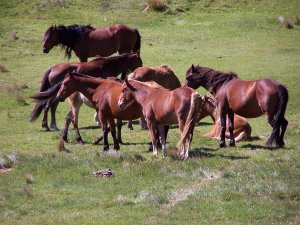 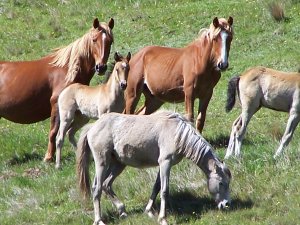 On our search for other groups of Kaimanawas we were treated to some serious off road driving and we were still on the tracks that the Army uses. Thanks guys!
It’s not every day you get to do something that really scares you.
The moment of panic was fleeting though and it certainly added to the flavour of the Waiouru experience.

It was also very kind of Lance to show us how  to 'belly out' a four wheel drive vehicle. Thanks Lance, very interesting. 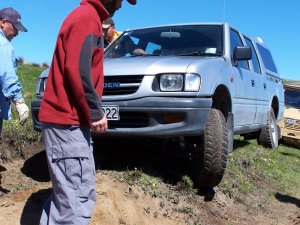 Thanks to the Waiouru Saddle Club, the Army guys at Waiouru and the Kaimanawa Wild Horse Preservation Society for organising the Trek and Drive weekend. And special thanks must go to the Officers that were promoted on Friday night. Your fireworks display at midnight right outside our barracks window was spectacular, once of course we had fully woken up, and the adrenaline had subsided, and we had come to the conclusion that it wasn’t W.W.III starting.